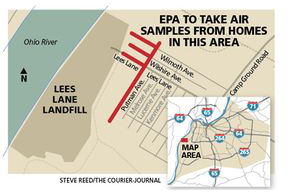 The Louisville Courier-Journal is reporting that the EPA will be testing Riverside Gardens homes for toxic chemicals. Dangerous vapors from the Lees Lane hazardous waste landfill may be seeping into nearby homes.

The sampling, which will start in late June, comes more than 15 years after the EPA first found problems with a methane-gas collection system that is also supposed to safeguard the Riverside Gardens neighborhood from chemical gases migrating from decades of buried waste.

Monitoring wells installed by the EPA last year found that methane no longer was a problem, but gas levels of seven other toxic chemicals were high enough to warrant testing homes. Contaminants of concern include Benzene, 1,3-butadiene, Carbon tetrachloride, Chloroform, Tetrachlorethylene, Trichloroethylene and Vinyl chloride.

It may take up to two months for test results to be returned.If necessary, the EPA will install remediation equipment.